Okay, I’m on late today, sorry.  It was a bit of a crazy one.  Anyway, I wanted to talk to all a ya’ll about a few things in true random Daisy style.  Giddy up. 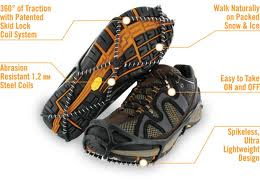 First – on your New Year's resolution to become a runner (right?  Didn’t you?  Wasn’t that on the list?), I wanted to point some of you who live in a snowy climate toward a tool that you can use to run outside whilst the world turns into a giant ice cube.  It’s called Yak Trax and m’dearies, they are amazing.  They are these metal coil thingy-ma-jigs that strap on with rubber and Velcro to the bottom of your running shoes.  It gives you a fantastic grip so you have a much less chance of falling on the ice that used to be a sidewalk.  As my dear Swedish friend says, “There’s no bad weather, only bad clothing.”  Those Swedes!  Ah, precis, det ar så popular.  Jag älskar dej, bastis!

Check out some fancy Yaktrax!

Secondly – What kind of doctor do you go see?  Have you ever considered a naturopath?  I seriously think you should.  If you get a good doctor (of any type, really), they are a gold mine of wonderful information.  I’m not knocking all other types of doctors, just so ya’s know, but I am discouraged that there are so many physicians out there who – instead of perusing your symptoms and seek an actual CAUSE – prefer to consult their gigantic book of cleverly painted pills and play Pick-Yer-Favorite-Color by using a Twister wheel provided for them by their own dear friends, the pharmaceutical companies.

Thirdly – Hillary Clinton.  If you believe ANYTHING that the media is telling you about her ailments that she so fatefully is experiencing at the perfect timing so that she does not have to testify in something that may incriminate her for wrongdoing, please, do me a favor.  Pick up a block of wood and bang it against your forehead like the monks in Monty Python’s Holy Grail.  This will help you.  Somehow.  If it doesn’t, just ask your doctor to give you the color of the week pill.

Fourthly – Guns don’t murder people, zombies and sickos do.  If you think you can solve the world’s problems by removing guns from the safes of the actual sane and law-abiding people, you might as well also ban steak knives, cars, gardening tools, ropes, and a plethora of other tools that any generic weirdo would get his weirdo hands on and do his weirdo things with.  Promoting vampires, werewolves, aliens, and crimes/murder (via shows like CSI, etc.) feed the mainstream of society and spread their sprawling talons with a slicing grip into every idea that used to be “normal” (two-parent homes, young people being respectful to their elders, not sucking blood out of people’s necks, etc.).  Society is broken into a thousand pieces and it just keeps getting hacked at every single day.  Politics aren’t going to fix it.  The media aren’t going to fix it.  (It sounds so weird to say that, but media is really a plural word.  Ugh.  It looks so gross and sounds weird that way, though, doesn’t it!?  Ew.)  There’s only one solution.  Move to Switzerland.  They all have guns there and the crime rate is like 0.000%.  That was easy!  Any other world problems, just send them my way.

Now let me just tell you what I really think.

Okay, I guess that’s enough soapbox for one day.

Peace, love and I’ll meet you in Switzerland with your Yaktrax on,
Ms. Daisy
Posted by Ms. Daisy at 10:04 PM