I don’t know how it is everywhere, but here in these United States, everyone loves to have a good solid New Year’s resolution or two.  Or five.  And amongst the throngs of lists of the many resolves, there stands one which is so prevalent and pronounced that it is quite likely that it is the most popular resolution ever made and I dare say it is made every year by the masses.  What is this resolution that is so near and dear and popular and prevalent?

This is never more evident to me than in the gym in the wee hours of the morning all throughout January.  I, being somewhat of a creature of habit, have my “own” locker at the gym.  If I could stencil my name on it, I would, but since I can’t, I just claim it by using the same one every single morning.  It is the perfect spot for me, oh how I love it so!  It never fails, however, that sometime in January, a person who is pretending that they are going to get fit and fabulous waddles in and steals my locker.  This only happens in January because about 5 weeks (6 if you’d like to make bets on it) after the new year, all of those people who were working it out to go work out totally quit and go back to sleeping in and eating potato chips on their couches while they identify with the contestants on The Biggest Loser (I love you, Bob and Jillian!) 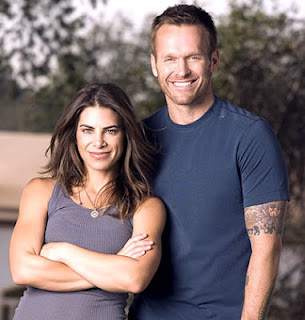 This is the time where all of the actual regulars rejoice and are free to enjoy a much more open space in the privacy of their own locker area without threat of invasion.

Maybe you’ve got a resolution to pick up a new hobby or learn something you’ve never tried before.  If you aren’t a runner, might I suggest giving it a whirl?  It is a very rewarding hobby and once you convince yourself you’d like to do it and begin pursing it, there are a myriad of benefits.  What benefits, say you?  Well, there’s the obvious – an increase in cardiovascular health, a trimmer figure, and perhaps even the coveted golden crown of weight loss and a shrinking of the posterior regions.  Then you’ve got the others – a great stress-reliever and an outlet for clearing your mind and lungs.  You get to enjoy the scenery around you on an up-closer scale that you wouldn’t be able to do if you were passing by on a bus or in a car and it gives you an appreciation for your surroundings (or you just get entertainment value by playing a game of “Grade The Lawns” as you run past).  You may even develop an addiction to it with all those endorphins flying around, not to mention the best sleep you'll ever have after a killer run (for all of you dear insomniacs out there).  Some research reports that running even reduces your risk of disease like breast cancer and osteoporosis for women.

Now you’re sitting there thinking, “Yeah, that’s just great Ms. Daisy, but I have to tell you something: I HATE RUNNING.”

I know, I know.  You like the idea of running but the actual doing it is horrid torture.  I was there.  I know how you feel.

I didn’t really know how, but I ran 6 days a week for practice.  I actually started off with quite hating running.  I could only really run about one block.  The amazing thing about your body and your muscle memory is that it grows and grows – the more you practice, the more you can do.  The positive reinforcement I got from being able to steadily do more and more (plus my idea that I would soon get to call myself “a runner”) spurred me on to keep it up, even when it was hard and I didn’t feel like it anymore.

I signed up for a 5k race (I recommend you do this.).  Every morning I would picture the other racers.  I would tell myself that they got up and were running right now (or perhaps they were already done with their run today) and they were killing it out there.  They were going for the gold and wanted to snatch first place away from me.  I have a slightly competitive nature and this worked very well because I would then run so hard I would nearly crumple into a pathetic little ball on the cement upon finishing each day (Also recommended, but not required.).

I am happy to tell you that if I can do it, you can do it.  I truly could not run more than a block.  After several years of training off and on, I even managed to finish a half marathon (13.1 miles/21 k).  I am not telling you this so that I can tell you fascinating stories of my personal awesomeness, but rather to say that YOU CAN DO IT!

Whaddya think?  Do you want to call yourself a runner?  What resolutions do you have?


Peace, love and train it like you’re Little Mac,