expectation is the mother of disappointment

I don't know if that is a quote that Socrates already claimed, but over the last week or so, that thought grew and bloomed into what I am guessing is going to be some kind of vital pithy saying that I'll throw out there every once in a while (mostly for myself, but for days that I am waxing eloquent it could also be shared with those feeling like a bag of crap - pardon me while I pat you on the back with this broom).

Quite frankly, I don't suppose it is something very comforting.  It basically blames that disappointed person when they already feel quite terrible already.  I do not like this aspect, but I think if you can walk around that to the other side and examine this under logic, you can hold it to prevent at least some future disappointments.

If you think about it, when you have no expectations, you really won't be disappointed in what comes out of life.  If you can perceive it in this way, you can almost be an amused bystander as things happen to and around you.

I am generally an optimist.  I do not find any joy or use in approaching life with a dark curtain pulled over it.  I don't see this as helpful, except in rare instances that feel like they will upset the very balance of my entire being, and in that case, I will purposely imagine the absolute worst possible scenario so that whatever does happen, it is sure to either meet or exceed my expectations in a good way.

What I am about to suggest to you is going to sound depressing, but I can assure you that if you take a good look at this, it actually yields pleasant results.


Here is a dreadful example from my own very exciting life.

A couple months ago, I was preparing for a speaking engagement. I had been doing some over the winter with good success - I was meeting a lot of people I didn't know and getting great feedback.  I went to a new venue and had to do my own marketing and promotion (gah, horrible).

I figured I could pull in maybe like half a million tremendously interested people who would be basically shoving each other out of the way and risking being trampled like it was Black Friday at Best Buy.  I imagined my books selling out and basically becoming a millionaire while famous people asked me if I'd like to sign up for either becoming the next greatest comedian or someone who should have an honorary doctorate at Harvard for my groundbreaking presentation skills and information.

The day was going to be great.  I had my outfit picked out, my sister and friend were going to help me with admission and book sales, and I was looking forward to being able to hold a microphone (BECAUSE I LOVE MICROPHONES).  Early in the morning, a friend told me he couldn't make it.  Sometime in the afternoon, I got a text from a friend saying that she couldn't make it that night.  A half hour later, I got another text from another friend saying the same thing, but for a different reason.  An hour later, I got another text with the same message.  After person number 6 or so, I still had a very optimistic outlook.  It was fine - they have things going on or they are not well, it will work out, plenty of other people will still come and it will be fantastic.

I mean, facebook said it would.  Just LOOK at all of those people who say they're coming!  It will be great.

We scurried around and set up the room and the tables and the projector and my laptop and the microphone, the books were set up, the clipboard with the names of people who were coming were on it, ready to be checked off.

Although there were hardly any people there, I figured they must be coming later.  They're just late, lots of people are late all the time.  I'll start anyway because I said I would start at 7:00 and I will.  I walked to the front of the room and looked out at the audience.

Terrible news and spoiler: I was not about to become wildly rich and famous this night.

This was when it hit me.  In this audience were a pile of people related to me (thank you), a few people who must have just felt sorry for me but wanted to support me, and a very small handful of others.

This is it?  This is it!  Oh holy crap.  So, I put in all of this work for nothing?  I'm not even going to have enough money to cover the cost of this room.  This is unbelievable! 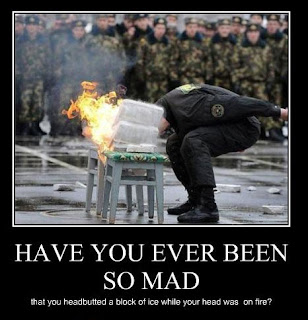 And then, the blind rage and insatiable fury welled up inside from the depths of my soul and I could barely see straight.  I am not sure because I have blocked it from conscious memory, but I think the only reason I got through the first fifteen minutes of that presentation was because I was reading slides like some sort of  unsocialized seventh grader who had to do the first public speaking presentation of her life but who really preferred to spend most of her time hiding in books or under tables or perhaps, more suitably, rocks.

Now, I don't know about you, but what made this exceptionally worse was that this failure got to be full blown in front of my family, who now would be permanently scarred with the embarrassment of having to be related to me FOREVER MORE, who really must be dying to sneak out to the bathroom in a nonchalant manner, but then just run full speed out to their cars, drive to the nearest bar, and get black out drunk at the thought that this was a branch on their own genetic chain and there was nothing that they could do about it except conveniently forget to invite me to the next family reunion and sharpie my face out of every picture ever taken with them.

After the first fifteen minutes, when I had begun to accept my distressing and unpleasant fate, I began talking to myself instead of listening to myself.

Now you listen here, missy.  You stop this nonsense right now.  Suck it up, buttercup.  I don't want you to express one more second or iota of this blind rage out of your face that you are experiencing because even though apparently tonight you are not going to become wildly and insanely famous, there are still people in this audience who deserve for you to take a cliff dive out of your own head and give them the information that you promised, and without the boiling ears and the facial expressions that are basically plain as day written on your face that you are going to go on a psychotic spree immediately at the conclusion of this presentation.  Whether you like it or not, you are going to stand up here for the next 45 minutes, and even though you would like to throw the microphone across the room and go bananas, that is not going to happen.  There must be ways that you could prevent this from happening again, so you will fix this later, but for now, rub some dirt on it and do this.

While this was undoubtedly the worst presentation I have ever done in the history of my life, I did learn some things from it and was reminded of other things I knew before, namely that:

1.  You can't take anything personally - you have to have thick skin for being in front of people and if you want to achieve anything of any worth at all.

2.  People flake.  If you've done direct sales, you live with this on a daily basis.  Expect it, it's not personal.

3.  Asking people to pre-register is a better idea than crossing my fingers and hoping people will show up.

4.  Being a wildly successful and famous person takes more than five minutes of effort.  Unless you're that kid yodeling in Walmart.

5.  Remember why you're doing what you're doing.  I got into health coaching and writing because I wanted to help people.  I really wanted to be able to help them change their lives.  I was tired of seeing people suffering from preventable issues and not getting answers or feeling that they are heard regarding their chronic health issues and lack of energy and brain fog from who they were dealing with in the medical community.

6. Some people have really good advice, even when you don't want to hear it.

It took the gentle words of dear people to help me to be able to pick this up and look at it again without wanting to scream, and without feeling judged as a complete and utter failure in all aspects of life to walk through this and try to make change for the next time around.

The next speaking engagement I did was wonderful and vividly reminded me of why I do what I do.  I walked in without expectations, telling myself that the people who would show up that night are the ones who were meant to be there - whether there were 3 people or 300, they were the ones who were supposed to be in my circle that day.  They were supportive of each other, asking questions and helping each other.  We made connections and laughed and learned from each other.  I walked in thinking that I am here to help, and I will help in every way that I can.  I walked out having connected with many other people, making new friends, and with opportunities to expand my business and to genuinely help other people.

Our lives are saturated with things that we might not prefer, but if we can back up, there is space to look at things through a different perspective.  Although my situation is embarrassing and makes me want to erase it from the hard drive of my memory, I shouldn't - it is a place for me to learn something.  I hope that it could be used to help others to learn the lesson without having to go through it.

We are not alone in our disappointments.  They fill our days.  People will fail you and not be who you want them to be.  You will find yourself in places you wish you could rewind and do over again.  In this, I've been thinking about a very well-known passage in the letter that the apostle Paul wrote to the church in Corinth - you've likely heard it, it's about love.  It says that you can do all of these heroic deeds, like letting yourself be burned as a martyr, to selling every last possession you have and basically living like a monk in a hair shirt, but if you don't have love, you're nothing.  You've basically wasted all of your efforts.  You could be the most amazing understanding genius and be a person who possesses all faith, but you will gain nothing.  It goes on to say that love endures all things and love bears all things.

Here it is directly:

I mean, good thing you aren't right NOW, I mean, that was before.  We are clearly fixed of all idiocy at present.

(Literally just wait five minutes and I'll have another story on tap.  Don't you worry.)