Are you an emotional pawn?

Hello lovelies!  I've just started reading a book entitled Trust Me, I'm Lying: Confessions of a Media Manipulator.  The author, Ryan Holiday, tells his stories of "marketing" for his clients, many of whom have millions of dollars for budgets.  He starts off by telling about a time where he designed, paid for, and put up a billboard, then drove to it in the middle of the night, dressed in black, defaced it, drove around the block, took pictures of it, and then sent it to various media outlets in the morning.

The response was astounding.  But he wasn't finished or satisfied - he submitted anti-women articles about it to feminist groups, anti-Christian articles to Christian websites, and made repeat calls for anonymous complaints about it.

It blew up astronomically.  People were angry from every corner of the world and he got exactly what he wanted - overwhelming attention with very little effort.  He played on people's emotions in order to suck them in.

Even though it was completely fake, it became an event - a "true" living, breathing, emotionally charged reality - for hundreds of thousands of people who became entangled in his deliberately artificially manufactured emotional net.  He got them.  He owned part of their minds.  He won.

He refers to a political cartoon from 1913 that is more true today than it has ever been before. In it, we see a businessman throwing coins from a gigantic bag of money labeled "money for business announcements" into the mouth of a tentacled monster, whose head is the press and whose arms include "cultivating hate", "slush to inflame", and "distorting facts". 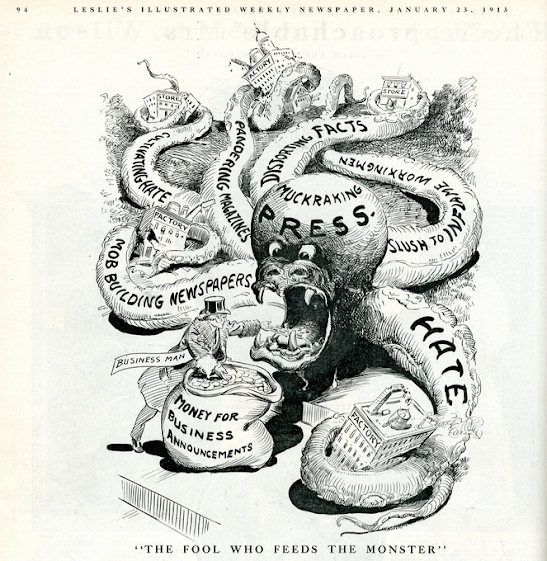 I believe that we are at a critical time where if we do not pay very close attention and fight back, the monster will destroy all of us.

Right now, if I asked you who your enemies were, would you easily be able to rattle off a list?  Consider it -

The right hates the left.

The left hates the right.

The vaxers hate the antivaxers.

Antifa hates everything and everyone.

These, we are told, are our enemies.

What if we're being played?  What if our real enemy is the media?

Our national presidential election was last week.  On election day, after being told daily for months by every single person across all social media platforms, through billboards, on television and on radio, to vote, to let our voice be heard - we went to the polls.  We did our civic duty.  We felt proud of our little patriotic stickers. We were so proud that we took pictures of ourselves wearing them like a gold star on our foreheads in a kindergarten classroom, some of us posting our picks to social media, watching the likes stack up and watching the haters react.  We regurgitated and reaffirmed that we had a voice and that our voice mattered.

The counting began and the main event started.  Even though we knew that we would not likely see results until at least the next day, millions tuned in to watch as if it were the big game, cheering for our side, feeling more tribal than ever.

We cheered when our team got a point and likewise boiled, muttering and scoffing in wonder at those who voted against what was clearly a sane, educated, forward thinking choice.  We thought of those with the yard signs - the ones on "our side" and those who were on the enemy's side - and our love and hate grew yet more. 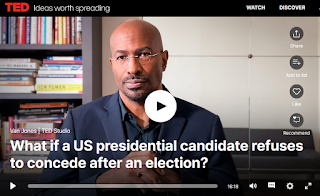 I have the app for Ted Talks on my phone.  A week before the election, I got a notification from Ted, telling me that I might be interested in what would surely be a valuable talk.  It was entitled, "What if a US presidential candidate refuses to concede after an election?"  It was given by Van Jones, a CNN political commentator.

Huh.  That's interesting.  Are we predicting the future?  Or are we just setting it up?  Do we have a history of this that I need to be alerted to something that I should expect to happen every four years?

What we saw next in the days following was surveillance videos, personal tiktok videos, and eyewitness reports showing that our votes - our voices - may have been compromised.  I watched a ballot counter in a yellow vest and a white mask lift up a ballot, point to the presidential section where it was marked, and then rip it up and throw it over his shoulder.  I watched a personal video and heard eyewitness reports of ballots being brought in to downtown Detroit in coolers.  I heard that the Dominion software (funded by the Clinton Foundation) used in critical states was flip-flopping candidates names (like in Antrim county in Michigan).  Attorneys were called in, and what was thought to be a guarantee was now being contested.

While questions were still ongoing, we watched CNN declare a winner.  There was a speech.  People reposted a video of Ms. Harris making a phone call to tell Joe that they did it.  We watched women repost all over social media to "watch out" because there was "glass all over" since the glass ceiling had been broken.

Without taking a side on the previous two paragraphs, I want you to think about what was really going on.  Fly yourself up above this and go big picture.

What was happening was the creation of a slush to inflame.  Whatever "side" you find yourself on, you are wired and pulled and tempted and played with to become emotionally entangled.  Why?

Because we know that fear and anger will turn your attention and potentially drive you to action, and that, more than anything, is what they are there for.

My concern is for what will happen once they've hooked most people onto one very passionate, die on this hill side.

What if the legal battle turns the decision the other way from what the media declared?

The fire will engulf us.  Those who thought that the glass ceiling was broken will crumble in despair at it being so unfairly snatched out of their hands.  Those who thought their voice was silenced will rejoice that they were not eradicated.  The media will have created another group to be us versus them, another team to be on, and another source of heated, passionate division.

What is the end of this?  A civil war?  The thought of that gives us so much pause, but it brings gleeful delight to the media.  How juicy!  How absolutely fantastic!  They will have unleashed the monster for near complete annihilation of the American people and what we know as our culture, our way of life, and the future of our children's lives.

Our enemy is the media.  You feed them every time you bow to worship their almighty proclamations, swallowing all of it whole: hook, line, and sinker.  Every time you feel the burning in your chest to smite that "other group", they found another hook to own you, to leverage your own emotions for their purposes.  They mock your pain, your desire to be justified and vindicated, and do it all while hiding in the background, throwing out fiery arrows to the middle of your street wrestling match.

From what Ryan Holiday tells us, why shouldn't we believe that much of what is out there is literally created out of thin air for the purpose of getting that attention?

How willing are you to place your emotional stability into the hands of an entity that lies to you and uses you?  You get a choice to answer that question every single day, multiple times a day.

We can get above it and see the big picture or we can continue to be pawns, fighting amongst ourselves, never looking up and seeing that we're really in the middle of a boxing ring on the Truman Show. 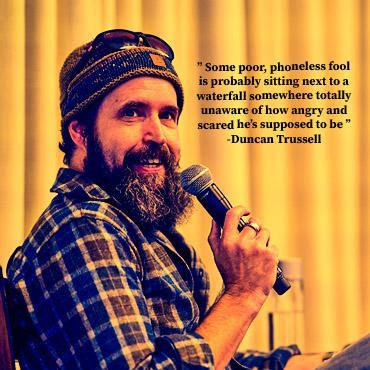 I'll leave you with this picture quote that I found today that I hope makes you consider the true state of what is going on.

Who and what will you willingly give your power and your life energy to?  It is no small thing and you should not bestow it haphazardly or unthinkingly.  Will you stand up and fight for humanity?  Will you help reconnect us?  Will you reframe your thoughts to recognize that others who believe differently than we do are not so different from us?  Will you be hooked and swayed by every wind that the media blows at you?  Will you believe all of it, whatever "side" it comes from?  Will you ignore the fact that the only thing they want is your pocket, your will, and your passion so that you can be shaped to carry out their desires, schemes, and plans?

Will you live the rest of your life content to be a pawn?