This morning was the first time this year I had to defend my locker space at the gym, but I was prepared.  It happened a few weeks ago for about 6 out of ten days.  I came back from the pool intending to stash my wet swim bag and water bottle in the top locker to find that someone had put a lock on it.

Initially, I thought, "Surely this will not happen again.  Who would want to stand in the same square footage as another person coming straight from the showers?"  Alas, I was mistaken.  Someone apparently did really want to stand on the same 1x1 foot square of ground as my very freshly showered self.  It happened again, and then again, and again.  I was significantly perplexed and disturbed as all of the other lockers in the section were empty and had no locks, and yet this person chose to select the locker that was directly above mine - the one I've been using for nine years almost every weekday. 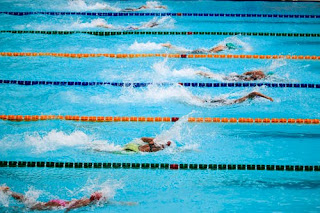 **Side note**
People who wake up at 4:50 a.m. to jump into a cold pool to swim for an hour to start the day and use the same locker for nine years in a row aren't usually people who are generally characterized as those who are laid back and go with the flow.

Obviously, I considered buying another lock and locking the top and bottom locker, but then I decided that probably wasn't necessary, and I could just spread out a bunch of random weird things in there that nobody else in their right mind would want to touch instead and solve the problem just the same.  Since that day, I've tossed in an empty bag, shampoo, a towel to save the spot while I was swimming and today it paid off.

Today, I returned from swimming and the brass lock adorned the neighboring top locker.  SAFE!  WINNING!

(Although, still perplexed.  Why do you insist on being this close to me?  All of the other lockers are available.  Personal. Space. Please.  Thank you.)

Although moderately disturbing, this is not something that is new to the landscape of January at the gym.  It is a magical thing that happens.  In the last few weeks of December at the gym, the parking lot in the morning looks like a barren wasteland.  You could do your entire workout plus cartwheels up and down the parking lot without any concern of being run over or killed.  You could mimic the entire movie of The Sound of Music (complete with all dancing scenes) without bumping into a car.

And then it happens.  The magical fairy dust of the calendar flips and the first working Monday in January bestows all gyms everywhere with plethoras of swarming humans in the exact places you have been for approximately the last 3,287 days.  You turn the corner into the parking lot at exactly 5:19 a.m. (and 20 seconds) and make the same left and right turns as you have done for forever (so much so that you can do it in your sleep - and half the time you actually are still asleep), and then gasp in abject horror when you see that a non-authorized vehicle has taken your spot.  Your spot - one row back and two places over from the lightpost - is being violated by a random car that you've never seen before.  You close your eyes and breathe, reminding yourself it is too early to commit crimes.  You see all of your friend's cars and they are all out of sorts also, scooched around like this is some kind of sick survival game.

But you are a survivor and you know what you must do - you must summon enough tenacity to bravely face what is ahead of you: the Return of the Resolutionists.

You sling your backpack off to one shoulder to beep yourself into the gym, saying hello to the front desk person who knows you by name.  The man who walks toward you with his towel on his left shoulder on his way up the stairs to walk the track at exactly the same time every morning nods in your direction and you nod back.  You glance at the elliptical machines and every single one of them is whirring as if we're trying to power the entire midwest from the output, and make your sharp left turn toward the locker rooms.  You swing the door open and take the thirteen steps to your locker.

FOR THE LOVE OF ALL THAT IS GOOD.

There is a lock there.  There are a bunch of strangers spread out everywhere and you're trying to smile in a friendly way, but you have to squeeze past them, and you're really just trying not to cry from having to think about what to do next because you are not programmed to do so this early in the morning.

You pull your coat and clothes off, grab your towel, swim bag, water, and conditioner, and lock up.  You stand in the same place you do every single morning at 5:27, holding up the wall and saying good morning to your fellow teammates.  They all are standing in the same place as they always do and arrive in the same order that they do every day.  There are more people here today, though, and they are punctuating the open spaces that are there every other day of the year.  The aquatics manager appears at the end of the hallway and all of us move in a Pavlovian manner to bend down and grab our swim bags.  She arrives with the holy grail at 5:29 and 40 seconds - the key to let us in.

You enter the natatorium and grab a kickboard and hop up onto the bulkhead to walk to your lane.  And then the worst thing in the whole world happens - someone else that you don't know is standing in front of lane 4.  Half of your soul dies immediately on the spot.  You consider leaving, but remember that perseverance only comes through difficulty.

All swimmers know that we swim in assigned lanes.  You have a primary lane and a secondary lane.  You would never swim in anything but those.  You would never swim with people you don't swim with because you know exactly how the people you swim with swim. You know when they will turn, where they will push off the wall and how far over you need to be to not have a head on collision, and who is most likely to take out the back of your hand with a paddle on a long set, or swipe your butt on backstroke, and who you will 100% of the time one-arm duck under on a returning fly so you don't die.  You know exactly what to do if they might lap you - you've choreographed it every day for years (Is it a wall pause with a foot grab or will you split until they pass?  Will they pass you on the left or will you flip turn and go under them?  And it will change if one of you is swimming stroke, so you know that, too.).  You know who will split and who will circle.  You know the pecking order and how to adjust for pulling and IM and a sprint set.  You know the hundreds of nuances of swim etiquette and who leaves 3 seconds early instead of 5.

As a result of the invader, everyone is bumped around and the Not Very Laid Back people are pretending we can be flexible, but now we don't even know how to swim anymore and are considering giving up on life in general or starting a war in the middle of lane 5. Two of the very vocal people are making statements aloud that you only barely thought of in your head.

Somehow - thankfully - we survive the day.  And the week.  Barely.  But not without deep trauma.

Soon enough, equilibrium will return.  Until it happens again next year.

Peace, love, and chlorine,
Ms. Daisy
Posted by Ms. Daisy at 8:24 AM No comments: