A walk through the urban garden

Do you know Sheri Salatin?  Maybe?  Well, do you know Polyface Farm?  If not, do you know Joel Salatin?  He's an author and he was the farmer on Food Inc. from Virginia.  Sheri is his daughter-in-law.  Now you've got it.

She contributes to a blog called Polyface's Hen House Blog.  It is awesomesauce.  (She has her own personal blog, too, if you are into reading about cool people.)

On her blog last week she shared some pictures of her garden.  She is growing some fun things to make salsa (she is from Texas).  At the end of her blog, she encouraged others to give a tour of their own garden.

Here I am!  Are you ready for your tour?

Well, let's start out by realizing that Sheri's garden is going to look A LOT different than mine.  Her background is beautiful Virginia countryside and mountains.  My background is my neighbor's garage.  We's goin' urban farming, babies.  So grab your .40, some pepper spray (for the pit bulls and the rottweilers) and some pink glitter (that's just for my backyard, other people don't have such stringent dress codes) and let's go.

First stop: The rose garden.  I planted a wild flower mix to attract hummingbirds and bees. 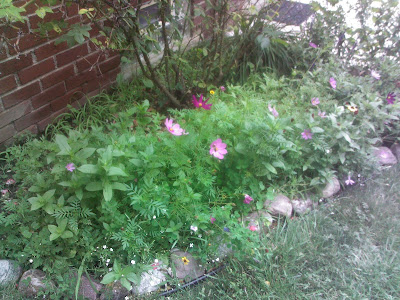 I haven't seen any yet.  Sigh.  Total bummer.  In the picture below you can catch a glimpse (sort of) of the hummingbird feeder with homemade organic sugar liquid.  They're not impressed.  Maybe the dog scares them off or maybe we never catch them.  Either way, I got nothing. 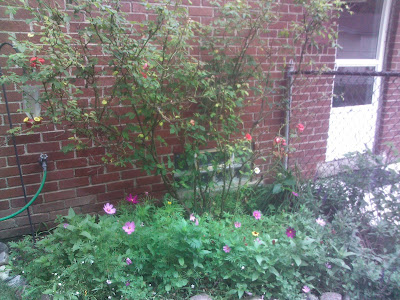 The rose bush has been here since we moved in.  I believe the roses are called the "Tropicana" variety.  They are my grandma's favorite roses and she used to have them at her house.  These roses are pretty crazysauce and they will not hesitate to poke your eyeball out.  Watch it! 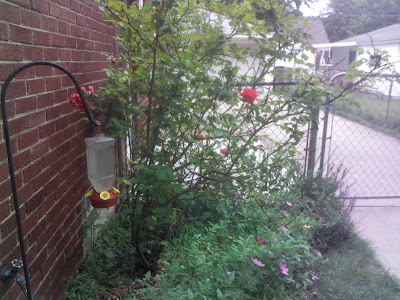 Okay, c'mon around to the other side so you can see where the veggies and raspberries are taking over the world. 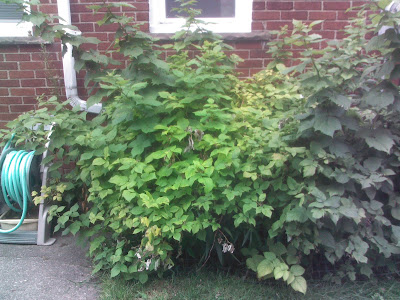 These are the raspberry bushes that have Pinkie and The Brain syndrome and want to take over the world.  Originally I had some strawberries in this area (and when we first moved in, this space was the only space I gardened in), but the strawberries are long gone and the raspberries are planning on taking over everything in the Midwest.  Beware.  They're trying to reach you from here.  They've just stopped giving raspberries about four or five days ago and before that they were giving me bowls of deliciousness everyday.  Perhaps next year they'll take over the entire yard and I can either have people pay to come and be eaten by them, er, I mean, to come pick raspberries from them - or, I can start a raspberry preserve making factory in my basement.  Either way. 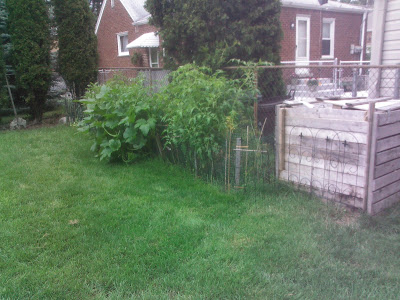 This is the mamba-jamba (technical jargon, I'm sure) garden of veg (and neighbor's house and driveway).  As you can see, all of my fruit and veg are in a competition to see who can climb out of their fencing the quickest and wildest.  The pumpkins are tied with the raspberries and the tomatoes are not far behind them.  The rats ignore all of them and throw wild parties in the compost bin. 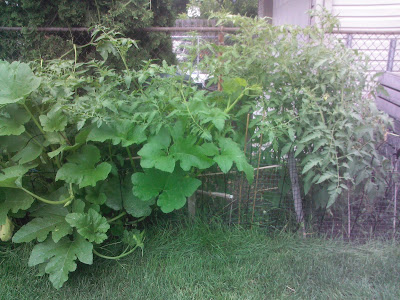 This is the front view of the wilderness.  My hubby HATES it when I plant more than two tomato plants because he thinks I'm choking them out and yada yada yada.  I have to make sure they don't die though, right?  I start everything from seed in a teensy pot on my windowsill and you just have to be careful when you're transporting them outside.  You never know if a German Shepherd dog will eat them or a rat or the robins and sparrows will do wild things to them, so you've got to have one on backup. 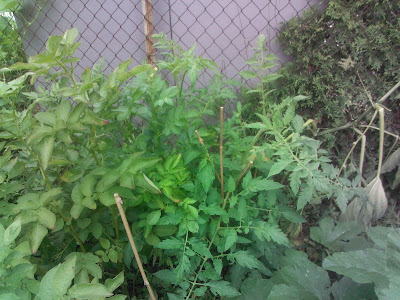 This wildness here is a variety of things.  I don't know if you can tell, but on the left we've got some potatoes growing.  The lower right of the picture shows some of the leaves from the pumpkins.  The back along the fence has my dying cucumber plant crawling up the arborvitae plant and JOY OF ALL JOYS - in the middleish of the picture is the result of what happens when you use compost in your garden - ANOTHER TOMATO PLANT that I didn't even try to have has popped up as a result of last year's tomatoes being in the compost bin.

I can't even tell you how much my husband loved this. 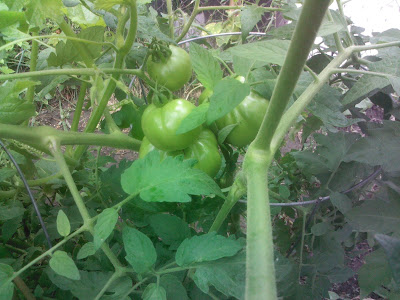 But look!  Tomatoes!  I hope they'll turn red before September.  We'll see.  I usually get them all in a ten day period at the very end of August/beginning of September. 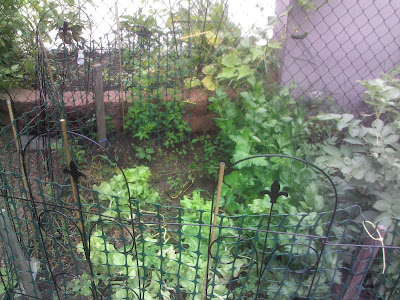 Over here we've got some lettuce growing (on the left - the lighter green) and next to them is a row of celery.  You probably already know this, but do you know how I do celery?  If you ever buy celery from the store (the celery hearts), you chop that bottom off and stick it in a bowl of water for a couple days on your windowsill.  In about 3 days you will have new celery growing out of the middle.  You can take that and plant it in the ground.  I do it every summer now.

The right of that (the duller green) is the potato plants.  I found an organic Trader Joe potato that had a sprouty eyeball sticking out of it and I threw it in the ground to see if it would work.  It looks like it's working so far.  Just hoping not to have an Irish potato famine and black potatoes when I pull them up in the fall.  I'll let you know. 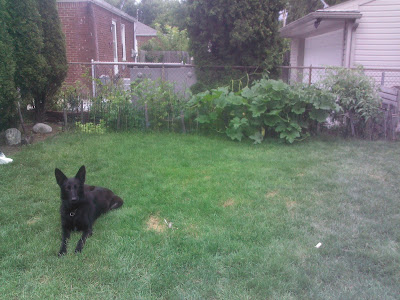 This is the dog.  Yes, the dog that jumps in my garden and kills it; the dog who hunts rats; the dog who made all of those brown spots on the grass.  She's keeping watch, ready to bark at whatever may cross our path.

As you can see, all of my fencing attempts are doing splendidly.

Well, that's the tour.  I hope you've enjoyed it.  Watch out for the pit bulls and the high fruc truck (I can hear it going by at present - oh, that's the "ice cream truck" for the rest of you).

What's in your garden?

Email ThisBlogThis!Share to TwitterShare to FacebookShare to Pinterest
Labels: gardening