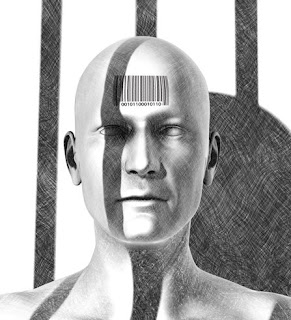 We stand at the junction of two paths.  Floods of people are going to the left, floods are pouring off to the right.  They are convinced they are going the right way.

They try to prove how right they are and they start by yelling at the other side, telling them how stupid they are.  This (remarkably) doesn't seem to convince them, so they dehumanize them, writing them off as less than human (maybe like 3/5?) and suggesting that they are a scourge on humanity and need to be disposed of.

Then strangely - I'm sure it's not at all connected - there is an uprising of violence.  This isn't a time to connect and see why or what caused it, it is a time to shift more blame, stand taller on the soapbox, and to yell louder.  This is advanced and successful communication.

The horrors of the past are filed under the fact that those old timers were ignorant.  They were slave traders, not seeing others as human.  They were greedy little pigs, seeking gain for themselves, running others over, letting nothing get in their path.   They were awful in their push for more land, dehumanizing the native people, raking them over the coals into a trail of tears.   They were influenced by old ideals and they do not resonate with us.

But we are faced with it now - it's not just relegated to our history.  It's here, saturated in lust as people are bought through the sex trade and human trafficking.  It is saturated in a hunger for power and land conquest.  (Does this story seem new to you?)

The ship is sinking and we're arguing about the curtains. 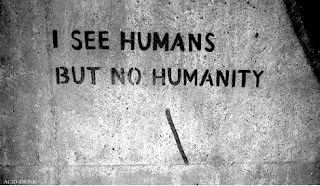 The people on the "other side" are people.  When you treat them otherwise, you are the slave trader, you are the one standing behind the Cherokee mother, swaddling her baby, poking her to keep moving west, you are the one buying a half hour with someone's daughter, chained to the bed.

Every atrocity could only be committed because the psychology allowed for another group to be seen as less than human, as idiots, as maniacs, as ones to be subdued, as worthless, as a waste of space, as disposable trash.

You stand on the dark side of history when you participate this way.

It does not mean that you must bow out of the conversation.  You have a voice that ought to be heard.  In order to hear, you really ought to listen.

Every idea that isn't yours isn't a personal attack.

Every belief someone holds that isn't reflective of your own is not a pointed insult.

There is so much poison out there.  You can drink it.  You can make more of it.  You can spray it all over your house, your land, your children, and bathe in it.

Or you can retain your intelligence with magnanimous poise and nobility, genuinely listening and seeking to understand.

You will be written into the tapestry of our history for future generations.  Which side will you be standing on?