You may already know this, but I am not a superfan of cereal.  Most of the time I feel like it is a little bit of a worthless thing, but that is because it is mainly marketed as something you eat for breakfast and it is (usually) loaded with sugar.  I am a strong advocate for eating something savory in the morning (after your 16 ounces of water, obviously) as it sets the tone for your palate for the rest of the day.

Sometimes you hear something that just inspires you.  I used to eat cereal.  Growing up, that was breakfast.  If I was lucky, it was going to be Lucky Charms (with as many marshmallows as I could possibly get).  As I got a little older, I thought I would refine my tastes with muselix or granola.  You know how that is - it's the fight in your mouth.  The challenge of the hard clumps that cut the top of your mouth - really, I've heard it said that there's nothing like it to wake up to (except maybe a good set in the chlorine).

Because I never buy it, my children think that it is Christmas, their birthday, and Superbowl Sunday all in one if we have cereal in the house and they end up acting like they are some kind of deprived and starving animals and eat it for dessert and the $6 box is gone in a day and a half.  (Well, that was worth it.  Not.)

Today is some sort of snowpocalypse and everyone is out of their minds.  People aren't going to work; children aren't going to school.  Instead, they are playing video games, skiing, and going to trampoline parks.

This was the day that the granola was destined to be made.

I had a recipe from a friend that was called "Elvis Granola".  Out of all of the people I know, this friend is the all-time world champion of granola eating, so I knew that it was going to be legit.  This "Elvis Granola" contained peanuts and chocolate, so even though it was basically dessert, I figured it was worth a try, even if that try was going to actually be dessert and not breakfast.

There was only one problem.

The original granola recipe called for canola oil.  Excuse me?  Canola oil?  No.  No way, José.  As if I would use poison in my recipe!

What's my problem with canola oil?  Well, first of all, approximately 90% of canola oil is made from genetically modified ingredients and sprayed with Roundup (glyphosate - made by Monsanto).  Glyphosate is a known carcinogen.  That looks like a bunch of cancer all over the place.  I'll pass, thanks.

The other problem that I have with canola is that it is inherently modified.  Canola oil wasn't invented until the 1960s in Canada, and it was invented because of a demand for a cheap oil (olive oil had a price point that was too high for manufacturing of faster foods).  It was derived from the rapeseed plant (within the mustard family).  Using it as rapeseed oil without hybridization led to a host of issues mainly because of its toxic levels of erucic acid (which can also be found in other members of the Brassica family, but has high concentrations in rapeseed and canola), like blistered lungs and skin.

Good news, though.  It is used to make paint because it will adhere to wet metal, which is great for ocean vessel applications.  Mmm, practical AND tasty.

By 1978, chemical companies figured out how to get the erucic acid levels lowered a bit so that we could escape the pesky business of lesions on lungs and other problems, and so they could market it to manufacturing as a cheap alternative.

In 1995, the brilliant scientists found a way to inject the DNA with a bacteria so that it could be resistant to Roundup, making it possible for farmers to spray mass amounts of Roundup on their fields, killing all of the weeds, but the canola plant would survive.  Genius?  Yes.  Diabolical?  Probably.

Canola oil is highly processed and also very reactive to heat, light, and pressure, causing oxidation.  (That means rusting in your body.  That means premature aging and degenerative diseases like cancer, Alzheimer's, dementia, and WRINKLES.)  When canola oil is heated, it produces high levels of butadiene, benzene, acrolein, formaldehyde and other related compounds.  Have you heard of any of those?  Yeah.  Poisonous carcinogens.  Awesome.

This study shows the unfortunate side effect of how canola oil decreased levels of vitamin E so drastically that some animals died.  (They supplemented vitamin E to see if and how that would help.)

Meanwhile, back in the kitchen, I decided that I would sub out the toxin for coconut oil so that when my offspring saw homemade granola and decided to go on a wild binge, I wouldn't be contributing to their early deaths.

Here is what I did instead. 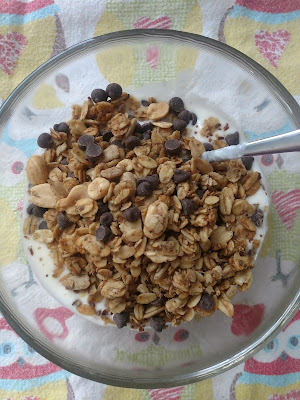 While that is simmering, get a big huge bowl (Pyrex for vintage feels) and dump in: 4 cups organic oats, 1/4 cup ground flaxseed, 1/2 cup unsalted peanuts, 1/2 cup sunflower seeds.  Mix it all up.

Dump the warm liquid into the dry crunchy.  Mix all over until everything looks so happy.

Pour onto two stainless steel (seriously, do not give yourself Alzheimer's with the aluminum baking pans) baking sheets and spread out.

Bake for 20 minutes, rotate pans, bake for 20 more minutes.  You may need a little longer than that, but check it at the 40 minute mark.

Let it cool.  Add a bunch of non-soy dark chocolate chips.  I like Enjoy Life brand because they don't have any allergens.  This is how I made it the first time, but I would add shredded coconut to the final mix because dark chocolate and coconut are bae together.  It would benefit the overall flavor to double the peanut butter and make it 1/2 cup instead of a wimpy 1/4.

I did not eat this for breakfast, and I won't because I am an egg and toast kind of girl, but it is an amazing dessert.  I poured it over my organic, grass-fed, whole milk plain yogurt and ate it until I thought I might make myself throw up.  Moderation?  I doubt it.

If you try it, let me know how you like it. 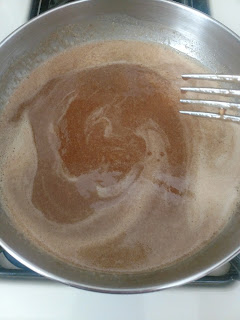 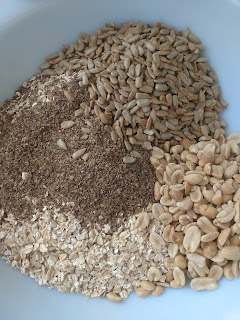 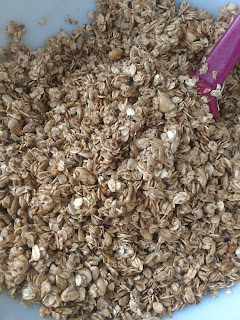 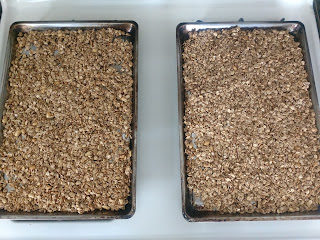 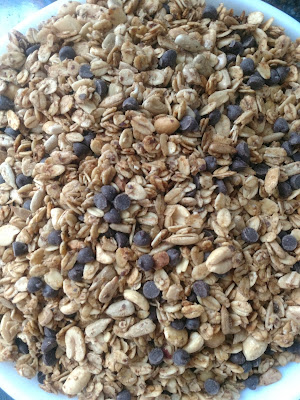